In Italy, Pelikan endeavoured to be able to offer school fountain pens in a simple, reasonably priced version on the market. The costs for a Pelikano with a metal cap were too high in production. In the 1970s, Pelikan Milan commissioned the writing instrument manufacturer Merz & Krell in Groß-Bieberau with the production of the Pelikan 120 and 400NN, which also carried out the replicas of the Pelikan 120 and 400NN.

These first Primapenna were the prelude for a number of further model variants up to the present time.

The first three model variants always had a plastic barrel, grip section and cap in the same colour, all with a metal ring at the cap opening and a metal clip. The special feature of all these Primapenna was the triangular hole in the nib, which cannot be found in any other Pelikan fountain pen. These three variants between 1970 and 1990 can be attributed to the manufacturer Merz & Krell.

With the takeover of the company Laurin, Pelikan also distributed simple and inexpensive school pens, which were initially sold under the name Laurin and later also under the Pelikan brand mainly abroad. These writing instruments were not manufactured by the Laurin factory in Waiblingen, but rather by the writing instrument manufacturer Mutschler in Heidelberg.

In the 1980s, the first models appeared whose shape was clearly similar to fountain pens made for Laurin by Mutschler. A special feature of these pens is the 'Primapenna' embossing on the clip. These models could be the first attempts at how these writing instruments were accepted.

In the 2000s, a new Primapenna model series appeared, which can be assigned to the manufacturer Mutschler.

Another multicoloured model series from the year 2003 probably only came in very small numbers to the market, since the manufacturer went bankrupt and the company was dissolved.

The first Primapenna were made by Merz & Krell on behalf of Pelikan Milan. The first generation of Primapenna does not have any profiling at the grip section and the gold-plated nib is covered up to the triangular hole. A metal ring is used between the grip section and the barrel to secure the cap. The ring on the cap opening is tapered, it is embossed with 'Pelikan Günter Wagner'. The bar clip comes together narrowly and is embossed with 'Primapenna'. The end of the cap made of the same color plastic bears the Pelikan logo.
There will be more color options than the ones listed here. 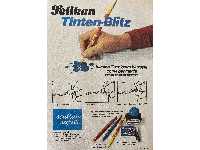 At this model variant, two different packages are known to me and the fountain pens has a tiny difference, too.
The first package shows a feature that was otherwise not so common at Pelikan. The fountain pen was equipped with two cartridges. Thus, the writing cartridge is not activated immediately and can dry out, a locking ring between the barrel and grip section was screwed. This must first be removed, according to package instructions, before the fountain pen can be taken into use (see picture). This method is well known to me from other manufacturers. But Pelikan used usually a different method: the writing cartridge has been replaced with a dummy (without ink cartridge, and without the rear cover of the cartridge). Only the replacement cartridge is filled with ink. Further, in this package was an instruction manual for the 'Pelikano'. The fountain pen itself shows the transition from the grip section to the barrel, which is to enter the closed cap the maintenance, a slightly roughened surface.
The other fountain pen packaging don't show this statement to remove a retaining ring (see picture). The fountain pen surface to grip the cap has slight ridges (see picture).
Probably there are more color options than listed. 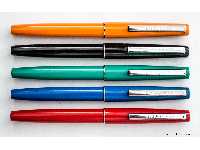 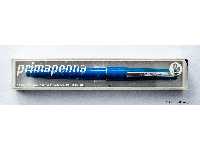 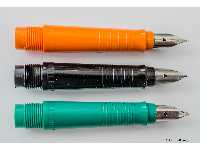 The change of this serie Primapenna can be ssen specially on the clip, the clip is plugged in at the top of the cap.

These models of the Primapenna come from the production of the company Mutschler in Heidelberg. The moulds are similar to the pens Mutschler made for Laurin/Pelikan, but with the Primapenna logo on the clip. It is unclear whether these models were sold on a regular basis or only as model samples. 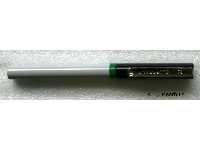 The design of this Primapenna has been substantially revised and will have been manufactured by Mutschler. Cap and barrel have a cylindrical shape. The cap and barrel ends are closed by a plastic plate of the same colour. The metal clip shows the lettering 'Primapenna' and the Pelikan logo. The nib no longer has a triangular hole and the simple stainless steel nib has no iridium writing point.
It is also interesting here that new fountain pens are delivered with a safety ring to prevent the inserted ink cartridges from already being opened (see also Primapenna 1970s). 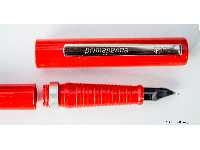 Also this series comes from the production of the company Mutschler Schreibgeräte AG. The bad economic situation and the increasing price pressure caused the manufacturer great difficulties during this time. Thus it is not certain whether these models were offered on the market for a short time or whether they are only samples. 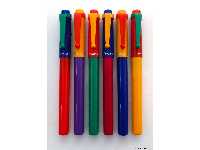 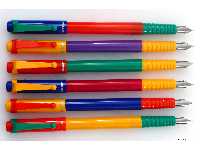 The Primapenna is now completely redesigned. The new Primapenna from 2013 is made by Herlitz, a company belongs to the Pelikan group. The pen is identical to the model 'SmileyWorld' from Herlitz. It consists of injection molded parts in two colors each. Barrel sleeve and cap sleeve are the same color, barrel end, grip section, cap end and clip are made in another color. The colors are strong and sometimes garish. They should meet the tastes of youth, for these fillers are determined. The nib with iridium point is exposed and very similar to a classical fountain pen. The cap margin is printed with Pelikan and the logo. No evidence suggests more attention to the model Primapenna. 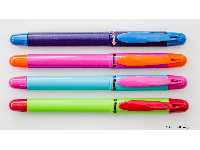 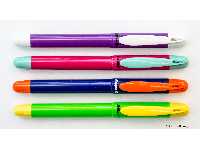 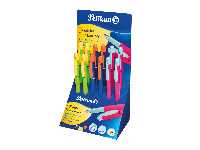