For the first year of learning to write, a children's fountain pen was created, adapted to the needs of the untrained child. It needs to be thicker and lighter than adult pens and more like a crayon in the hand.
Pelikan met these needs with the development of various learn-to-write pens.

In 1993 the Pelikano junior was introduced. The pen is intended to be the 'first fountain pen for schoolchildren'. The plastic cap made it lighter, but could not be posted on the barrel end for writing. A recess behind the ink window allowed a label with the child's name to be inserted. The non-circular shape of the pen prevented it rolling off the desk. The pen fulfilled the requirements of the British government for safety caps on writing instruments for students. This was adopted after a school child was suffocated after getting a pen cap stuck in his windpipe.
The models were produced in right-handed (model no. P60) and left-handed (model no. P61) versions.
Around 2000 of these Pelikano junior were produced in a simpler design. The models only had a stainless steel nib without gold plating. The barrel had no differently colored end cap and the head bore a brand logo in the same color as the cap. After this, the Pelikano junior was sold in the  Plus Pack. In these packs 2 caps, 2 barrels and a grip section in a Color-Mix were offered. So there were now also barrels in blue, red and green and caps in the colors blue, yellow and green, and children could change the color scheme of their pen as they wished. 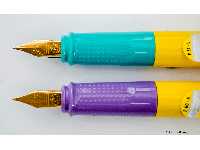 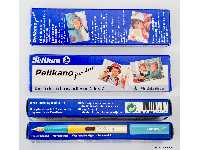 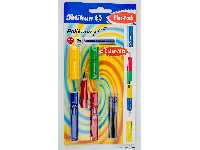 In 2001 there was a fundamental change in the Pelikano juniors. A special grip pattern was made from grey rubber was made with grooves preventing the child's fingers from slipping. The ends of the cap and barrel were rounded. The magnifying glass-like protruding ink window and the raised lettering 'Pelikano' on the cap served to stop a stored pen from rolling. The barrel was manufactured in matt translucent colors, and the cap made of white plastic. The nib was taken over by the model Future, a fountain pen for the market segment for school and youngsters. Models for right-handers (model no. P65) and left-handers (model P66) were made again. Translucent barrels allowed the use of brightly painted ink cartridges for these pens. 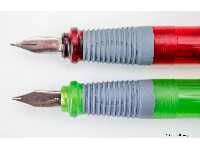 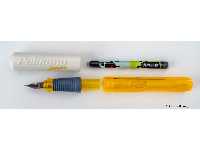 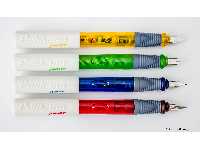 In 2005  the grip profile was revised again after it was found that the  rubber grooves of the previous model were irritating in longer writing sessions. The white cap was replaced by a cap in the same color as the barrel. The pens were given the model numbers P67 (right-handed) and P68 (left-handed). The nibs of the fountain pens are imprinted with the letter A (= beginner) or L (= left) for left-handers.
In 2013 the Pelikano junior was issued in two new colors of purple and turquoise, following the trend of the times, but with the same technology and design as the 2005 models. In 2016 the color pink was offered. 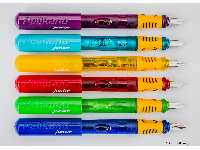 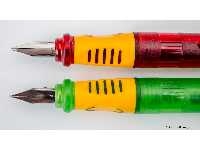 With the 'Cap Selection' series an even broader range of variations is created for the caps of the Pelikano juniors. The cap top in translucent white bears no logo. The cap binding is printed with a variety of designs. Even the word 'Pelikano' is printed and no longer protrudes from the cap. The barrel with the grip section corresponds to the 2005 models. 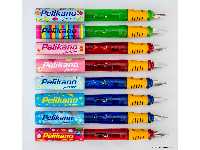 In 2018, the grip profile of the Pelikano junior will be revised once again; it follows the change that the Pelikano P480 and Pelikano UP already underwent in 2017.

As a Color Edition, there are two fountain pens in the colors violet and anthracite, which, with the exception of the grip profile, correspond to the models from 2005 and later.

Four other series models in old, familiar colors, which were also reissued in 2018, differ from the previous models not only in the grip profiles, but also in the "junior" lettering on the cap. This lettering is no longer printed in white on the cap, but is raised just like the "Pelikano" lettering. 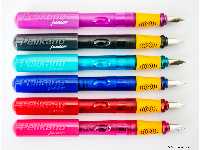 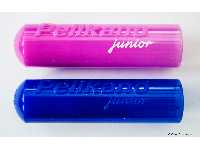 The Griffix Pelikan product concept shows another way to introduce a child to writing with pens. There are four pens all based on the same body design. The system was jointly developed with the Fraunhofer Institute. Step 1: wax crayon, Step 2: Pencil, Step 3: rollerball pen and Step 4: Fountain pens. The pens are ergonomically adapted to children's hands. A laughing smiley shows the child the correct grip for the pens. The pens are all available for right- and left-handers.
Since the first edition of this writing instrument minor changes in the design have been incorporated continuously over the years.

The differences between the temporal variations can be recognized by the cap color, the smiley, the ink window, recording the name badge and the barrel end for the individual buttons (see picture with explanations).
In the first variant, the packaging of the writing instrument included one or two buttons, which could be inserted into the opening of the barrel end. In this way, should the child (in addition to his name tag)  identify his own writing instrument faster. For this Griffix model there were additional 3D fun buttons featuring monkey, flower, dino, pirate, robot, rocket, devil, football, etc. to acquire.
The Griffix variant from 2012 showed an altered barrel end: A depression with gaps in the form of the eyes and mouth of a smiley served for receiving a motif chip, but must always be purchased separately now.

The Griffix variant from 2017 has a screw cap, instead of the previous plug cap. The plug has been found in practice as a weak point and a reliable hold was not always given. 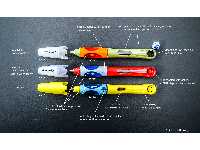 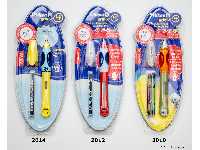 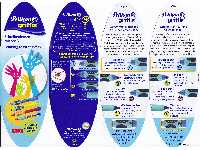 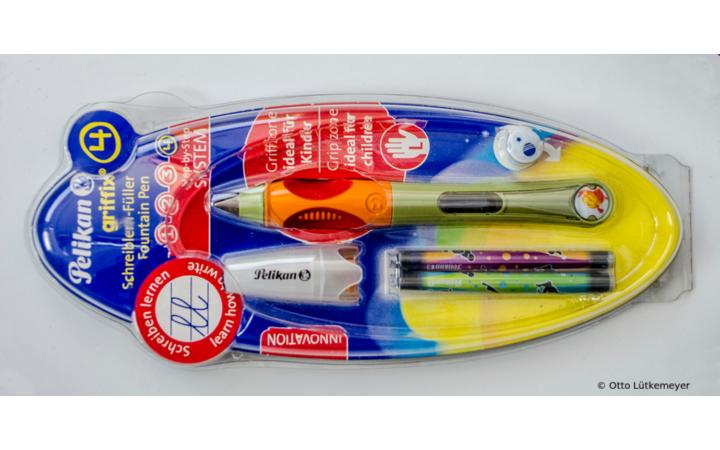 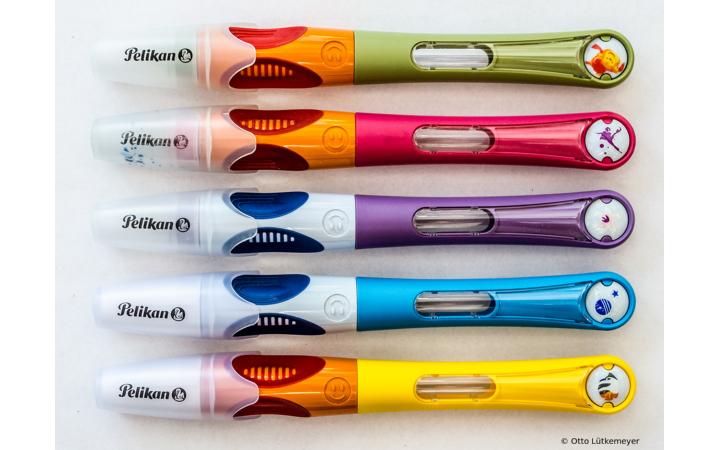 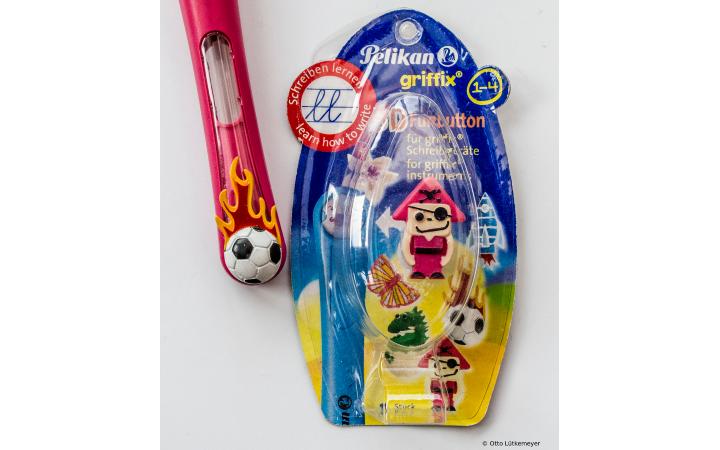 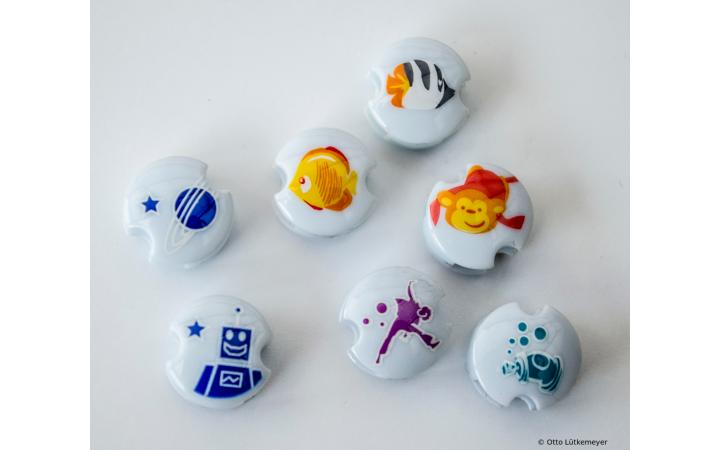 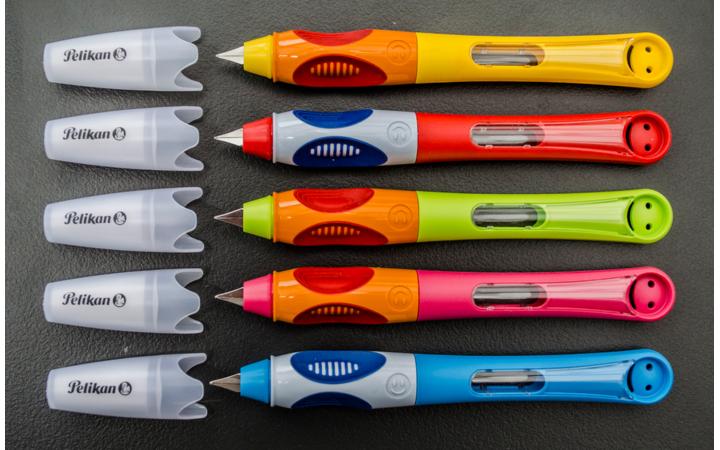 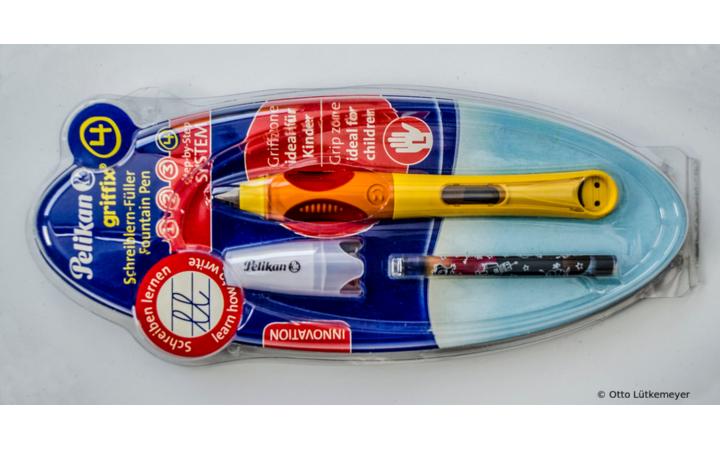 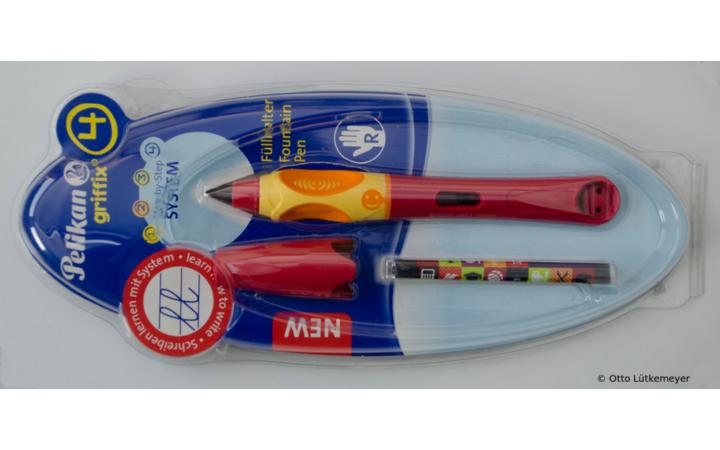 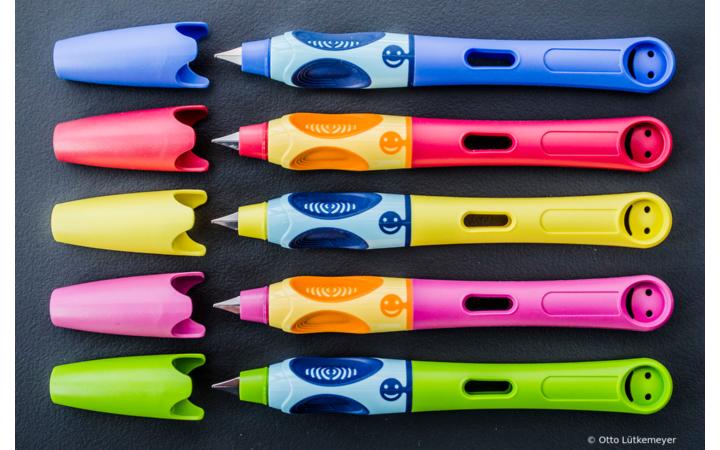 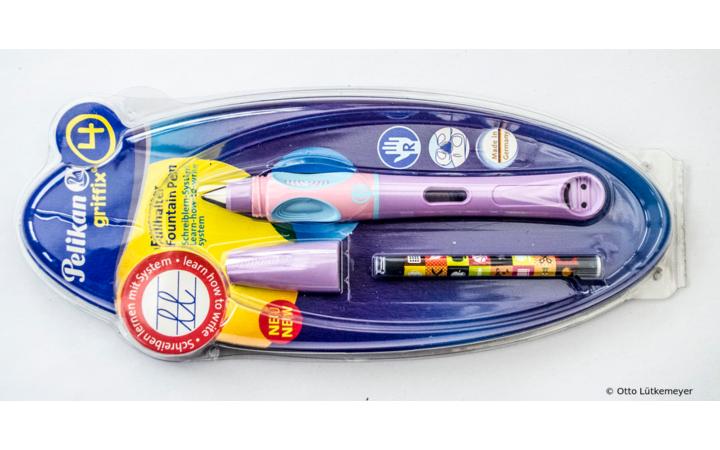 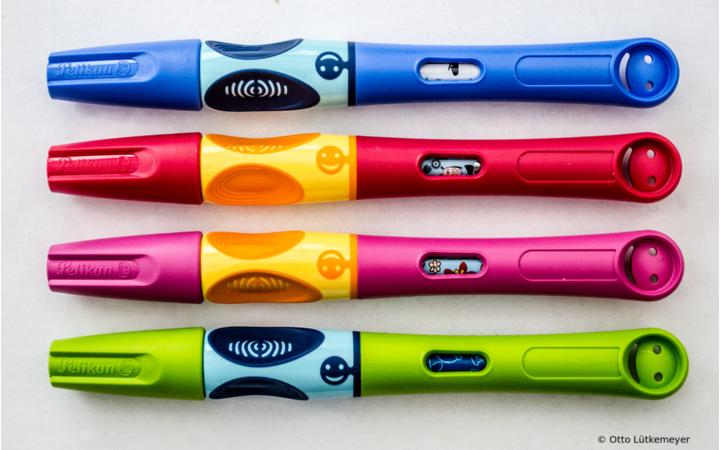 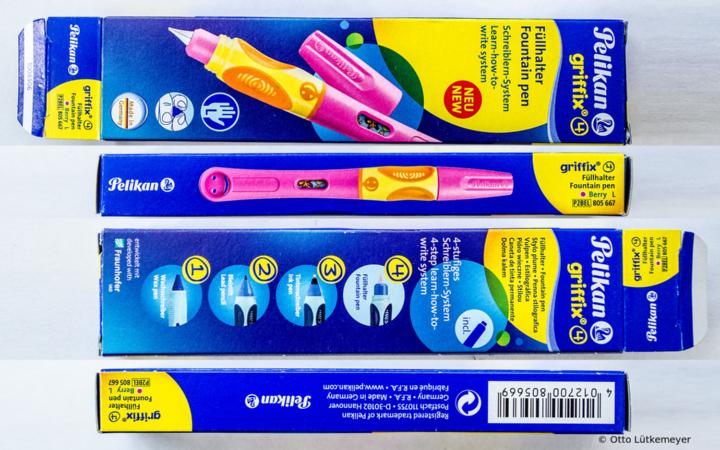