Official Special Editions and Limited Editions are listed on this page. The pens based on a standard Pelikan fountain pen model can also be found on the relevant page. The orange frame (see picture) marks such duplicate entries.

On the Model page prototypes, company orders and low volume productions are listed next to the standard models and the official, Limited Editions and Special Editions.

The link below will take you to the site of the model.

Mark as an indication of double display of the fountain pen

In 1993 Pelikan introduced a limited edition model - very much the trend at that time both in fountain pens and for many other products - with the M800 Blue Ocean.

These official Limited Editions are shown on the site by the name of Limited Editions. Many other models were manufactured in limited quantities, too, e.g. company orders, but these are listed under the regular model number. 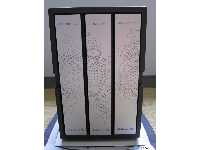 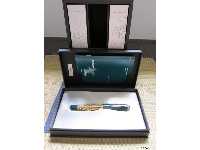 Gold bar in the barrel

Golf clubs on the barrel

Genesis of the Olympiad
In honor of the Olympic spirit Pelikan designed the fountain pen 'Genesis of the Olympiad'. The edition of 776 copies, symbolizes the year of the first Olympic Games. The gold-plated sterling silver sleeve is engraved with an illustration showing a foot race in the stadium, which was the only discipline for the first 13 games, and remained the most important event even after others were introduced. Each copy is identified by its numbering as unique.

Barrel with logo of the XVI Commonwealth games.

Above the 14 carat gold sleeve also a custom built a hibiscus flower made of 14 karat gold was set whose five pistils wear red, green and blue diamonds.

Expo 2000 - People in 1998
Pelikan designed a special edition series of fountain pens for Expo 2000, as an exclusive partner. The limited edition began in 1998 with the 'human' themed fountain pen, joined in 1999 by the 'nature' themed pen and finally 'technology' in 2000. Each edition was issued in the same number of pieces as the year (1998, 1999 and 2000 pens respectively). Each pen has its unique edition number.

Expo 2000 - Technology 2000
The last writing instrument of the Expo Special Edition  completes the trilogy of limited edition pens with an edition of 2,000 fountain pen on the 'technology' theme.  The ornaments on the fountain pen barrel are formed from elementary, but mostly hidden structures of the three factors. The structures of a microchip on the Special Edition 'Technology' illustrated remind us of one of the most important changes since the invention of writing.

White Tiger
Pelikan presents the 3. limited edition from Chinese mythology. The 'White Tiger' has an edition of only 888 pieces. The '8' is true in China and the Far East as a lucky number.
The four auspicious animals are gods of the cardinal directions and make all spirits their shape. So the White Tiger is the deity of retribution. It is a strong sign that health and happiness promotes, protects the good and punishes the wicked. Because the White Tiger embodies these different qualities, it also symbolizes 'hope' and 'fear'.
Now the White Tiger by the skilled hands of absolute masters of their craft in Pelikan was presented beautifully and individually inverted on a fountain pen barrel. The barrel is made of solid 24 carat gold-plated 925 sterling silver.

Xuan Wu is the fourth pen in the  Asia Limited Edition, the famous Pelikan series based on the great legends of China, with a worldwide edition of only 888 pieces.
According to Chinese mythology, there are four auspicious celestial animals: dragon, bird, tiger and turtle. As highly revered deities they are also the zodiac signs for the four cardinal directions ..
With Xuan Wu Pelikan shows the deity of the northern sphere, the element of water. According to its constellation, it resembles the mythical creature which is part snake and part turtle.
Xuan Wu was hand made by respected artisans at Pelikan, incorporated in solid 925 sterling silver that is plated with 24-carat gold.

Daedalus Icarus
With this new Special Edition Pelikan made a collector's item dedicated to the myth of Daedalus and Icarus Myth and  decorated with their symbols.
Art and technology are also connected inextricably with this Special Edition, as they were with the myth of Daedalus in ancient Greece. The Icarus emblem is made of solid 925 sterling silver, and a nickel silver clip and hand inscribed nib of 18 carat gold, decorated with rhodium, adorn this unique fountain pen.
This worldwide edition numbered only 800 pieces - as a direct reference to the 8th century BC, when Homer was the first writer to mention the name of Daedalus.

The barrel of the pen is modeled on the ornaments of the portal of La Pedrera.
The advertising broschure as PDF.

The Pelikan's Kirin is the 5th and the final piece of the entire Pelikan Asia LE, they started off with the Dynasty, Phoenix, White Tiger, Xuan Wu and at last the KIRIN. The Kirin is described as the mythical animal with a Dragon head, snout of a pig, horns of deer, back of a tiger, waist of a bear, with body covered with scales; exuding an aura of mysticism with power to ward of evil.

The Laser engravings to create the surface of the 'Laser Pen' was made by Visconti in 2000 on request of Pelikan Milan.
These pens were made in an exclusive/limited edition of only 100 (each pen individually numbered) pieces, made only
for the Italian market.
Already a rare pen, with only 100 produced, it's reported that Pelikan headquarters in Germany removed an unknown
number from the marketplace.

Gekko means moonlight in Japanese. This fountain pen is made with the Australian abalone shell. Though the size of this abalone is big, the blue color part of this abalone is small. So it is necessary to select the best blue color parts. The abalone shell is placed on the ground and flattened with a hard stone into very thin sheets. These sheets are cut into narrow strips and then affixed to the coating of lacquer around the cap and the barrel of the M800 fountain pen. Once again, it is coated with lacquer, and then the surface is polished. The Pelikan logo is drawn with the famous Maki-e technique, surrounded by matching colors of particles of the abalone shell.

Kyokko translates as sunlight and is made with the abalone shell from Japan Sea. As the size of the abalone is small, the parts used for Raden is limited. It is one of the most colorful abalone parts that reflect rainbow colors. The abalone shell is placed on the ground and flattened with a hard stone into very thin sheets. These sheets are cut into narrow strips and then affixed to the coating of lacquer around the cap and the barrel of the M800 fountain pen. Once again, it is coated with lacquer, and then the surface is polished. The Pelikan logo is drawn with the famous Maki-e technique, surrounded by matching colors of particles of the abalone shell.

Refined, unique handcrafted art pieces were awarded in an auction.

Limited Editions on a run of only one!

Refined, unique handcrafted art pieces were awarded in an auction.

Limited Editions on a run of only one!

Unique Collection 2014 No. 9. Based upon M800. Technique: Togidashi-Taka-Maki-e and Chinkin