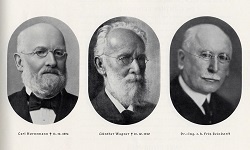 The story of Pelikan AG dates back to 1832 when the chemist Carl Hornemann (1811-1896) began a company in Hannover making paints and inks. The official date that operations commenced was April 28, 1838. Hornemann was the son of an art shop keeper and drawing teacher at the court of King George V of Hanover. Hornemann had the idea of starting the business, because in those days most artists' colors were  imported from France and England.

By 1860, the company employed about 20 workers, including a chemist.

Change of ownership and the hallmark Pelikan 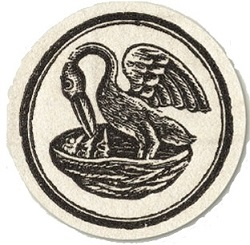 Emblem of the family from Günther Wagner

In 1871 the former plant manager, the chemist Günther Wagner (1842-1930), took over the company and from 1878 used the Pelikan, the emblem of his family, as a hallmark of the company. The company logo originally showed a pelican with three chicks in the nest. When the company owner had fourth child, the number of the little birds was increased  to four. To sharpen the character of the logo and make it more recognizable, the number of chicks was reduced to two in 1937 by the graphic artist Oskar Werner Hermann Hadank. Since 2003, the logo has shown only one little chick in the nest.
From the 1880s, the company expanded with around 40 employees. This was due primarily to the success of the   Austria-Hungary commercial agent Fritz Beindorff in developing the company's markets in Southern Europe and the Balkans. In 1887 Beindorff became [a director of the company], and in 1888 he married Elizabeth, Guenther Wagner's daughter. In 1895 he purchased the company and became the owner of Pelikan.

In the early years the company produced student quality paints, inks for children, and artists' water colours. Another product was liquid ink, which had previously been offered only as solid ink sticks. From 1895 the range was extended to include more and more products in addition to the previously produced ink and other office supplies. In 1898, the iron gall ink 4001 was introduced to the market. It was an ink which did not fade, making it suitable for official documents. Within a few years it was the best-selling ink in the world. Because it guaranteed the authenticity of documents it was also favored by state authorities. From 1904 until the 1960s, Pelikan also produced a common paper adhesive called Pelikanol.

The company first acquired the  patents for the Pelikan fountain pen (using solid ink) from the Croatian chemist Slavoljub Eduard Penkala, and in 1925 acquired the patent of  Hungarian engineer Theodor Kovacs for modern fountain pens with a differential piston system. In 1929 Pelikan started producing fountain pens with its piston filler, later known as the Model 100, the first Pelikan fountain pen. The piston mechanism provided a smoother flow of ink without blobbing or leaking, in addition to a larger supply of ink. The peculiarity of this pen was the differential screw system. The green marbled binding and the semi-transparent ink window were the visible trade mark of this pen. In the upper price segment, Pelikan brought out the first Toledo fountain pen in 1931.

By 1938 and the 100th anniversary of the company, Pelikan employed 3,700 people. By the outbreak of the Second World War, the company employed nearly 5,000 people with factories in many European countries and in South America (Brazil). The Second World War with the general scarcity of goods forced Pelikan to restrict its product offering and to use substitutes for some materials. Due to the of labor initially shortage more women were employed, but also POWs and forced laborers. As a consequence of the war the company lost their foreign based factories through expropriation.
In the years after the Second World War Pelikan experienced an economic boom and became a leader in the industry. This was due mainly to the 1950s introduction of the  Pelikan 400 fountain pen, which became known as Stresemann. This pen had a barrel with green / transparent stripes. The designation goes back to the striped trousers of the Stresemann-style suit, which is named after the German Foreign Minister Gustav Stresemann. Fountain pens were henceforth one of the most popular products of Pelikan AG. In addition to the green / transparent version,a brown / black / transparent version also existed, which can still be quite frequently found on pen collectors' forums. This pen was modified again and again from the 1950s onwards and is still available in only slightly modified form. In the 1980s Pelikan expanded this series to the M600 and M800 fountain pen and brought all these models together in the so-called Sovereign (Souveraen) series, the purpose of which is to provide customers with the best writing experience possible. The cheapest priced among Pelikan's modern pens is the series of M150 to M250, which mainly differs from the Sovereign-series, in that it is equipped with a stainless steel nib. Writing instruments in the Sovereign series have two-tone gold nibs in 14 (585) or 18 carat (750). Pelikan is one of only a few manufacturers who produce the nibs of their fountain pens for themselves instead of buying them from a specialised nib manufacturer. In the 1990s, the Sovereign series was complemented by the largest model M 1000, and it was also at this time that Pelikan started to produce limited editions.
In 1960, the Pelikano student fountain pen was introduced to the market. In the early 1970s a simplified script was developed by educators with the help of Pelikan, and was partially incorporated in school curricula.

In 1982 Pelikan AG's massive expansion led to a financial crisis, and it declared bankruptcy. In 1984 Pelikan AG was acquired by Swiss-based Condorpart AG, and the company was split up and partly closed down; one-third of the workforce had to leave. The Pelikan AG was now part of the Pelikan Holding AG, run from Switzerland. In 1990, Pelikan took over its competitor Geha in Hannover and some production was moved to Pelikan. In 1994, Pelikan Hardcopy was started for for toner cartridges and other printer supplies; it was sold to the US company Nucote in 1995.

In 1994, all Hannover production was relocated to the factory in Peine-Vöhrum, where since pens had been produced since 1973. As a result, 1,100 jobs were lost. In 1993 the factory site in Hanover was converted to the "Pelikan Quarter", an upscale neighborhood with condominiums, restaurants, hotels and offices. In 2003 the company's management left the Pelikan quarter and moved into new buildings near the Mittelland Canal.

In 1996, the Malaysian company Goodace SDN BHD (which now operates as Pelikan International Corporation Berhad) acquired the majority of shares from the Pelikan Holding. In January 2007, Pelikan Holding took over again the businesses it had divested in 1994, Pelikan Hardcopy Holding AG and the German Hardcopy AG. In 2010, Pelikan International Corporation Berhad (PICB) based in Puchong, Selangor, Malaysia took over the the stationery manufacturer Herlitz, including the logistics center Falkensee, and on March 1, 2014 transferred its ownership to Pelikan.